How do you define success?

What is success for you?

These questions are possibly the most common ones you can find in slam books – those colorful little notebooks containing questions that made the lives of those born in the 80’s and 90’s go round. They were meant to be handed down to a person’s closest cliques. If you were not in someone’s slam book, you were not definitely not a friend. It was the closest thing to Facebook when I was in high school.

I loved to read the somehow irrational and childish answers of my beloved classmates. Apparently, I had classmates who were too lonely to include “attaining happiness” as a gauge to their success. Either that or they considered themselves successful upon reaching High School. As far as I am concerned I didn’t have a classmate who was so depressed he committed suicide. There were those who attributed success to owning a car and having a personal swimming pool in the backyard of their make-believe castles. Yeah, and maybe my answers back then ran along those lines as well. I even wanted to have my own basketball court on the rooftop. I also wanted to have my own library-this being more plausible.

Oh yes, I did love to answer those success-questions. I had a foolish idea back then that teaching in College defined success. Compared to the first jobs I had, at last I had something I was interested in doing, something that could give me the drive. The bosses were great and inspiring and they even made me want to be part of a new generation of educators, people who could motivate students and show how learning could be possibly fun. However, good things tend to last short. Good people went out, new people came in. New rules were set and those hungry for power intimidated the weak. I might have become a better teacher after what I went through in those years I stayed there but sadly, it did not make me feel successful. It did not.

“But dreams do come true.”-Giselle, Enchanted

Mine did. My mother received two copies of my novels just few days ago. The fact that I have been able to produce a novel finally sank it. She couldn’t believe it. And I…well, I am ecstatic. If slam books still exist, I know I have the perfect answer now. Some people may say it is still too early for me to define this moment my success. Some novels have been published but more of them have been scrapped from polished bookshelves. But just like pregnant mothers, giving birth to their children, seeing my book in print gives me that satisfaction. There are some parts I need to improve but those mistakes cannot puncture this inflating bubble inside me that can only think of one thing: That is my novel. 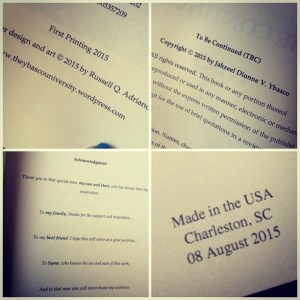 And to seal the deal, I have finally received my first 2-star review. I thought I should congratulate myself. After all, the battle doesn’t look so sweet when it is too easy. If this isn’t success, and I don’t know what is.

After all, I have written one. Who knows how many I can write?